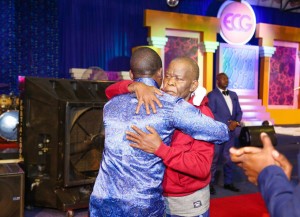 A man’s heart stopped beating during a Sunday morning worship service at a ECG church in Pretoria South Africa. Prophet Major One Bushiri implored his congregation to pray with him, what some are calling a modern miracle occurred, a dead man

Senior ushers of the church focused the congregants on prayer and praise while the emergency team performed CPR on a dead man.

As white sheets were held up to block attendees’ view of the disturbing scene where the body lay lifeless, Prophet Bushiri told the crowd, “I want you to shout until the heart start back beating.”

The visitor Bheka Ntuli from KwaZulu Natal was in town for a family reunion and chose to attend service with some of his relatives. Though details of his condition are unknown to Number1life editors at this time, the situation was serious enough to snuff out his life.

In the approximately 20-minute long video, the tension was in the air, as some looked shocked, while others cried, and still more prayed.

“They can perform CPR, but only God can give him breath,” said Prophet Major One Bushiri, who was unflinching in his faith during the entire ordeal.

“Let the same breath that you breathed into Adam’s nostrils, breathe that breath into his life right now,” Bushiri prayed, pleading with God to demonstrate his miraculous power.

“When I count to three, somebody shout Jesus!” he said, to which the people assembled responded with
enthusiastic chants.

Then Prophet Bushiri asked, “Is that a chest moving i see?”

He followed up the question with a prophetic word. “God told me to tell you that Bushiri stands for I am victorious.”

Less than a minute later, an gray-haired woman walked over to the pastor and announced, “He was dead. He’s back!”

The church exploded with raucous praise, dancing and shouting.

Prophet Major Bushiri said, “The Holy Ghost told me to tell you all right now—and I knew it before I even heard anything—God said, because y’all were here, because God put him here while you all were here, and he had somebody praying for him, [his testimony is] I was gone, but now I’m back.”