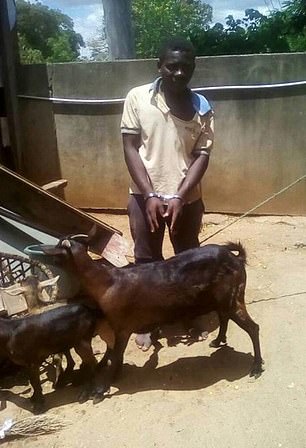 A man has been accused of raping a goat in a field – after asking it permission for the vile act.

The animal’s owner initially suspected Kennedy Ndlovu was trying to steal the goat. But when he returned with neighbours to nab the 21-year-old they caught him having sex with the creature in KZN, South Africa, he told police.

Police Inspector Samson Sithole said: ‘The owner Mr. Enock Mkhize thought Ndlovu was stealing it. So he alerted the people. ”When they arrived at the scene they were shocked to see him having sexual intercourse with the goat.”Ndlovu was apprehended and taken to a police station and charged with bestiality.

He reportedly claimed he had asked the animal’s permission first to have sex with it. The goat had been part of a grazing flock on the outskirts of the village. The gender of the goat has not been disclosed.

Last November, in neighbouring Eastern Cape,Thembisile Nicholas Baleni, 22, was arrested by police after he was caught naked raping his pal’s pregnant goat in East London.

And earlier the same month twisted Sivuyile Sowazi, 33, was convicted of raping his neighbour’s pregnant goat in his bed in Winterveldt, South Africa.