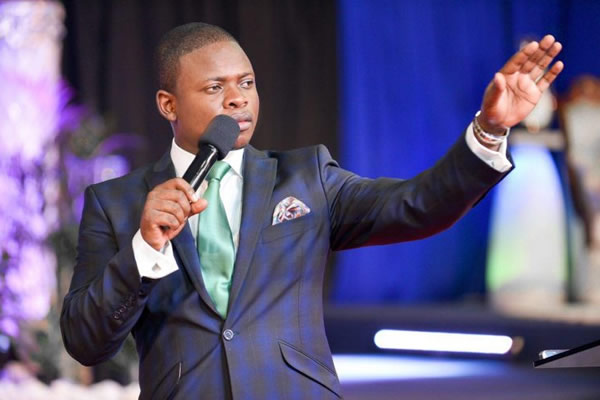 Prophet Major One Bushiri issued a statement on behalf of ECG that all church members who are going to get SASSA grant increase and R350 social relief grant must pay R50 tithe to the church. In the statement Bushiri said it is through his prayers that all members of his church are alive and not infected.

When contacted by Media, Prophet Bushiri insisted that his church is the most criticized by media. He questioned the level of media scrutiny directed to his church and claimed that there is a personal vendetta against him by people who are working for forces of darkness.

“Our church have its own rules and customs. We follow them at all times. We are not cafeteria christians, we follow the word of God even in difficult time” said Bushiri.

Bushiri, who caused a social media furore two weeks ago when he asked his followers to donate offerings to his controversial enterprise to sustain it during the nationwide lockdown, has now set up the self titled “Major 1 Connect” app, available everywhere.

His church, the Enlightened Christian Gathering (ECG) said that over six million people had jumped at the chance to interact with the prophet when the app was launched on Sunday 19 April.

These six million people are said to have watched the broadcast through streaming services, with 7 000 having logged into the app.

They said in a statement that followers would be permitted to some premium features, such as interacting directly with Bushiri through video conferencing.

“ECG Church Members and followers across the world become part of the church service through subscribing to Major 1 Connect, an application which helps them joining the video conferencing hosted by Prophet Bushiri in his studios in South Africa,” they said.

“Through the video conferencing, those connected are able to interact with the Prophet, just like a normal physical church gathering.”

“They are able to talk with the Prophet and most important of it all, to pray with him as their number one prayer partner.”

They said that the platform would allow devout followers of the church to continue to worship during the lockdown.

“The ECG Church is happy with the innovation as it provides a platform of praise and worship that is safe, one that keeps people in their homes, in the wake of Covid-19.”

The feed is then streamed to live broadcasts on Bushiris in house  broadcaster, Prophet Channel TV, as well as YouTube and Facebook.

The ECG believe that over 25 000 people will tune in through the app during the next Sunday broadcast, after 7 000 logged in to the app for the first session on Sunday.
Share on:
WhatsApp